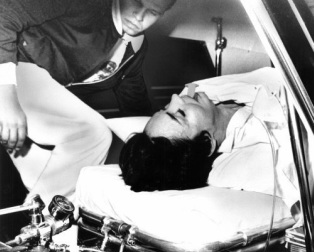 LOS ANGELES - Actress Jennifer Jones was found sprawled on rocks at the base of a 400-foot cliff overlooking Malibu Beach last night, apparently lifeless and not breathing.

A deputy sheriff revived her by mouth-to-mouth resuscitation. She was reported in good condition today.

Deputy sheriffs found the 48-year-old Academy Award winner moments from death at the bottom of the cliff. She was on her back on the rocks, waves washing over her body.

Miss Jones was found less than an hour after she learned that Charles Bickford, lead actor in her greatest movie, "The Song of Bernadette," had died.

After learning of Bickford's death, she telephoned her physician and told him she had taken some pills and was going to take more. He notified police.

Deputies said Miss Jones parked her car, apparently walked down a narrow, winding path toward the sea and collapsed on the rocks at the edge of the Pacific Ocean.

The sheriff's department said it appeared the actress had not slipped or fallen from the path, which winds about 1,000 feet back and forth across the cliff.

Miss Jones won an Oscar for her portrayal of May Bernarde Soubirous, a French peasant girl from Lourdes who professed to have visions and conversation with the Virgin Mary. Bickford was a priest in the film.

A family spokesman said Bickford and the actress were not unusually close friends.

Since the death of her husband, producer David O. Selznick, two years ago, the shy, retiring actress had made no movies and appeared in only one play, a 1966 revival of "The Country Girl" in New York's City Center.

Miss Jones, born Phylis Isley, in Tulsa, Okla., married actor Robert Walker in 1939. The couple had two sons. She was divorced from Walker in 1944 and in 1949 married Selznick. They had one daughter.

In 1955, Miss Jones was voted by some 15 million moviegoers as the best actress of the year for her performance in "Love Is A Many Splendored Thing." The Oscar for the best performance by an actress that year, however, was awarded to Anna Magnani for her role in "The Rose Tattoo."

During her years as a star, Miss Jones was rarely seen in public and never at public functions.

In 1954 she made her stage debut in the Broadway play "Portrait of a Lady," which she later confessed was a failure.