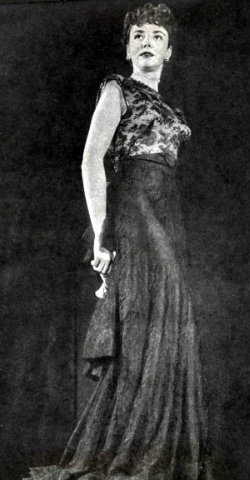 Because she is the most talented of Hollywood's youngest dramatic actresses, LOOK presents Miss Jones with its feminine motion-picture achievement award - for the second time. She won the first in '43 for her performance in "The Song of Bernadette", scores again this year for her vivid acting in "Duel In The Sun". She has effectively interpreted pathos in "Since You Went Away" and now action-melodrama in "Duel". Says one of Duel's directors, King Vidor: "She has such extreme natural talent that it shines forth in a crowd of seasoned troupers." Says another, William Dieterle: "She is a real artist. I definitely think she will become one of Hollywood's greatest actresses." Her next picture will be "Portrait of Jennie" opposite Joe Cotten.

David O. Selznick discovered Oklahoma-born Phylis Isley in New York five years ago. She was then married to a struggling young radio actor, Robert Walker. Selznick recognized the fire hidden behind the young housewife's squirrel-like shyness. He signed her up, changed her name - and her life.