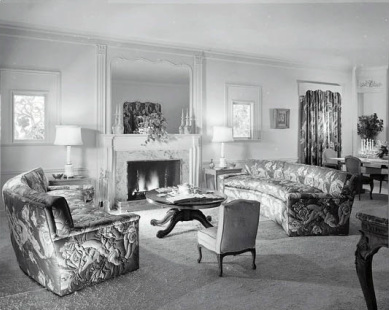 The year was 1946 and movie babe Jennifer Jones was 27. She'd rocketed to fame playing the ingénue daughter of compassionate Claudette Colbert in David Selznick's blockbuster "Since You Went Away." She'd won an Oscar for her pious saint in "The Song of Bernadette," and notoriety was on the way for her turn as a sex goddess in the just-released "Duel in the Sun." Branded by critics as "Lust in the Sun," that film — the most expensive production to date — was the tale of a sultry, half-Native American seduced by a spoiled, Texas rancher played by tall and dark Gregory Peck.

In real life, things were no less sizzling. Jones, a Catholic girl from Tulsa, Okla., was mother to young sons and the willing pawn to her career mentor and lover, the controlling producer Selznick. The secret affair between the star and the Svengali 17 years her senior, desperately hidden from meddling gossips, had tanked Jones' marriage to actor-hunk Robert Walker and Selznick's to wife Irene, the saber-tongued daughter of MGM studio warlord Louis B. Mayer.

David and Jennifer were Romeo and Juliet compared to Levi and Bristol, but in the conservative years when good women tended home fires while patriotic men went off to war, Jones was a TMZ news scandal needing 24/7 spin control.

And spin they did, with Architectural Digest photographer Maynard Parker staging Jones' Georgian living room in '46 as the opening scene to an imaginary sequel, "Brentwood Bernadette." A former star herself, Beverly Hills decorator Barbara Barondess MacLean had painted the walls a pale shade of virgin pink, with green and chartreuse quilted upholstery. She'd arranged the curved sofas in front of the marble and mirrored mantle. Parker lighted the fire, turned on the lamps, plumped the pillows and set the low table with flawless porcelain cups, sugar, creamer and pot. Lights, camera, action — Jennifer's tea party.

Tea originated in the chilly hills of China and spread around the world by camel, yak, mule and ship. From the poet gardens of Shanghai to the merchant bazaars of Afghanistan, from the nomad yurts of central Asia to the palace salons of St. Petersburg, tea was poured, and still is, billions of cups a year.

Americans adopted their tea tradition from England. There, in the 18th century, coffee shops first served Londoners' favorite blends of fermented pekoe to men of all classes who hung around, raucous over the news of the times: finance reform, medical quackery, court crises, media debacles and celebrity sightings. In 1717, tea magnate James Twining opened the first salon for men and women, and from then on, at home and in public, tea was the everyperson drink. It came in all colors, from east and west, north and south, warming the soul of civilization.

Hollywood understood tea history well. In movies, brews served in the shade of old oak trees and by the glow of winter fires brought lovers and old friends together. On and off screen, tea parties stood for civility, respect, manners and refinement. They mended fences and built bridges between men and women, old and young, rich and poor, the baker and the mayor, the seamstress and the mistress. Money and politics were not to be discussed, as they were over liquor and coffee served to men. The tea party was social democracy at its best.

Sixty-four years ago, when Jennifer Jones needed fans to know she was a good mother, neighbor and homemaker, there was no better way than to suggest she served tea at 5 in front of a warming hearth.

Later in life, Jones married millionaire Norton Simon, founder of an eponymous art museum in Pasadena. He loved gorgeous things, and as Jones' friend and fellow actress Joan Blondell once said, "Jennifer was a very beautiful thing." To those who saw the magazine spread, she was more. She was Brentwood Bernadette, a beautiful American.

Back to Article Index