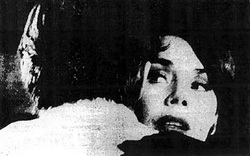 Miss Jones Looks At Love In London by Stephen Watts

The assistant who calls her to the set says "Mrs. Selznick." So do the chauffeur and the hotel receptionist. But the chic, attractive woman who faces the camera, or who later curls her stockinged feet under her on the sofa and talks, is unmistakably Jennifer Jones, star in her own right since she won an Oscar for her first leading role, in "The Song of Bernadette" an incredible 22 years ago.

Miss Jones is now working here on "The Idol," her first film since "Tender Is The Night" (a faint grimace as she mentions it) three years ago. Since her husband of 16 years, David O. Selznick, died earlier this year, little has been heard of his widow, by disposition a retiring woman at any time. But "retiring" in the acting sense - which has been rumored - has no place in her thoughts. Since she came over here for "The Idol" the word "comeback" has also cropped up. Both notions make her laugh.

Jennifer Jones has a doomed affair with a youth, Michael Parks, in "The Idol." "How can one talk of retiring when one has been an actress since the age of six?" she says. As for "comback" she simply remarks that it has been a long interval between pictures, but it's not the first time that has happened. "There have always been projects going, but for one reason or another they did not materialize. Three in four of the projects I'm involved in never came to anything."

When people ask her what she has been doing since last seen, she says it reminds her of Laurette Taylor being asked the same question at the time of "The Glass Menagerie." Miss Taylor replied, "Talking a look at myself." Miss Jones thinks it is a good answer - and a good thing to do.

When the moment came to re-emerge into professional life it came with a rush - and more than a touch of irony. Carlo Ponti sent Miss Jones some time ago an original screen story by the Italian writer, Ugo Liberatore. As it was a mother-and-son story, the suggestion was that Miss Jones might play it with her own 25-year-old actor son Robert Walker Jr. But Miss Jones found the idea of playing this particular mother opposite her own son somewhat distasteful. "I said it might be a good thing for Bobby - but with another actress as his over-possessive mother!"

Then Joseph E. Levine acquired the story, had an English script written and signed Kim Stanley for the lead. "When I read that," says Miss Jones, "I thought, 'Oh, just one more of my big mistakes,' for I'm a great admirer of Miss Stanley."

Leonard Lightstone, who is producing the picture, picks up the store here: "Kim Stanley arrived in London sick and under a terrible stress of personal problems. Her face broke out in a rash. The picture was due to go in three days. We knew - and Kim knew - she couldn't do it. It was a three-day panic. We knew Jennifer had never read the final script so we had one rushed to Hollywood and she had two days to decide - and get on a plane or not. I spent a fortune on trans-Atlantic calls and it didn't help my ulcer either."

Back to Miss Jones: "I liked the new script very much. Also it caught me at the right moment - a moment for flight. Everything combined to make it a desirable thing to do. So here I am."

Sixty per cent of "The Idol" is being shot in and around London and Miss Jones was to be found the other day with her colleagues - Michael Parks, John Leyton and Jennifer Hilary - working at the parish church of Chelsea under the direction of Daniel Petrie, a youthful looking, Canadian-born New Yorker with a veteran's record of television production and half-a-dozen feature films, including "Raisin in the Sun." Petrie was delighted to find his star eager to explore all the meanings and motives of the story.

"The Idol" is essentially about an American divorcee living in London who wants to see her son (Leyton) become a doctor and merge with the Establishment environment into which she intends to marry; but he wants to be an artist. He makes a friend of a young American (Parks) who is a rebel against authority and jeers at Leyton for being a mother's boy. The mother and the son's friend achieve instant hostility, but in the end have a brief affair, with tragic consequences.

"Ambiguous" is Petrie's word for the relationships. But, he implies, isn't life like that? All the questions have open-end answers. Is the mother just over-possessive - or more? Subconsciously incestuous? ("There's a theory," says Miss Jones, "that at a certain point a mother is her son's ideal wife. Of course, unless she's sick, she lets that situation resolve itself.") Is the relationship between the two boys latently homosexual? Is the mother-and-friend affair simply physical attraction, or some sort of revenge by the boy on parental moralistic attitudes? Miss Jones breaks the thickening web of speculation with a healthy laugh. "Oh, now, we're getting too deep..." But around her hotel room are books like "The Parental Image" and D.H. Lawrence's "Fantasia of the Unconscious," which she admits to finding fascinating.

How does it feel to be acting again after three years? "Like riding a bicycle," she says. "Once you've learned... you know." But some days later, over lunch at her hotel, she went thoughtfully back on this. "I realized afterward I had made it all too glib and easy. The truth is that with me it doesn't matter if the gap is three months or three years. I'm always taut with nerves for the first few days. The only thing that's true about the bicycle bit is that you know you've done it before so you must be able to do it again once you've got the rust off the bicycle and settled in yourself."

On the mother situation, Miss Jones speaks with authority. But she is certainly not the over-possessive type. Bobby is married and his mother is rapturous about her daughter-in-law and two grandchildren. "He told me on the telephone, the other day that he'd really like to be an oceanographer." Her other son, Michael, 24, is, his mother says, also "working at being an actor but his real ambition is be an archaeologist," Mother is unworried. "I'm delighted so long as they're happy in what they do," she says.

With her sons on their own, Miss Jones is still raising a family - she has a daughter, Mary Jennifer Selznick, 11.