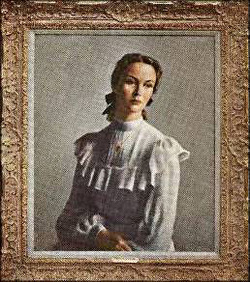 "Portrait of Jennie", David O. Selnzick's latest film production starring Jennifer Jones and Joseph Cotten, has special interest for the art world both in its theme and in its key prop which could only have been supplied by an outstanding portrait painter.

The picture is a dramatization of Robert Nathan's nostalgic romance between Eben Adams, a struggling young artist, and Jennie Appleton, a mysterious girl of 10 who appears out of nowhere to bring love and fame to the man who wants to wait for her while the years slip by like fleeting moments. From the time Eben Adams (Joseph Cotten in the film) meets Jennie (played by Jennifer Jones) skating in Central Park, the story pictures the girl at five different age levels and follows the course of the unknown artist's rise to fame through his painting of Jennie's portrait.

Robert Brackman was chosen by Selznick to paint the portrait which in the film can be seen to grow under the brush of Joseph Cotten. The canvas was painted in Brackman's studio in Noank, Connecticut, near New London, where Jennifer Jones resided during the period required for the fifteen sittings needed to complete the picture. Brackman also made a pastel study of Jennie as a young girl, which appears in the film in the early phase of the romance. 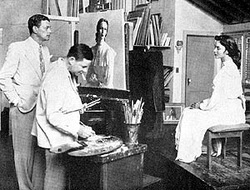 Many scenes in the picture which have their setting in "St. Mary's Convent" were filmed in The Cloisters, New York's famous museum of medieval art, situated in lovely Fort Tryon Park on a high bluff overlooking the Hudson River. Other dramatic episodes were filmed in the Metropolitan Museum of Art.

The Brackman canvas, upon completion, was handled with a tenderness usually reserved for the old masters. From Connecticut it was shipped to Hollywood in an air-conditioned transcontinental airliner. From the airport the picture was hustled to a fireproof, air-conditioned vault. The special case in which it was packed was not opened until actual scenes featuring the painting were to be filmed. Soon the portrait will be on its way back to New York to be hung in the Metropolitan Museum of Art at the time of the film's release in early 1949.

Brackman's portrait of Jennifer Jones was photographed many times during the fifteen sittings required for its completion.