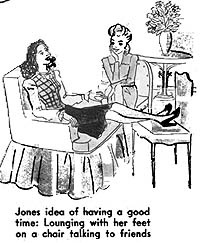 Personal History: Originally produced some twenty-five years ago in Tulsa, Oklahoma, as Phylis Isley, she was later reproduced by Hollywood as Jennifer Jones.

Current Beau: She claims, "No one"; the columnists clamor, "Navy Lt. Bob Taplinger - ex-publicity man." But the facts are she stays home more evenings than not.

Worse fault: Laziness - she's the modern Sleeping Beauty. She can sleep anywhere, any time, and she has to drive herself to everything in life, from housekeeping to business appointments.

Pet Hates: Low heels on tall girls; the three songs "I Want To Be Happy," "Trees" and "The Donkey Serenade"' insincere people; and coffee.

Ex-boy friends: Just one - who is also her estranged husband Robert Walker. They met in school and parted in Hollywood, five years later. 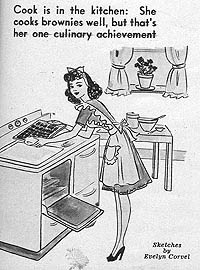 Pet form of entertainment: Dancing, once a month, in night clubs; eating chili or banana pie; and lounging around with her feet on a hair talking to the few people she sees and likes. Favorite flower: Violets - in bunches she can carry around and sniff. She never wears flowers, fresh or false, at all.

What she wants in a husband: This goes under the title "Mood of the Moment." For she doesn't want a husband at all!

What she can cook the best: Brownies - dewy inside and crunchy outside. Alas, despite years in the kitchen, she can cook nothing else well; which is why she and her former husband ate most of their meals at drugstore counters...until money and a cook entered their home!

Ideal home: It will be French Provincial or early American - with furniture you can curl upon, colorful drapes and a dancing fire. Outside there'll be a tennis court and flower gardens; but no swimming pool for many years. Not until small Bob and Michael can both vote and swim! 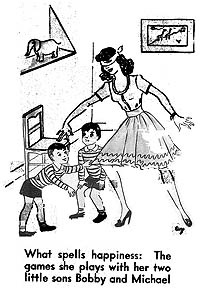 Happiest moments: They happen when she has a whole free afternoon - she just relaxes. She plays the piano; or walks for hours alone down country roads; or reads Ben Hecht's and Thomas Mann's short stories; or plays games with her two little sons, or sits (for hours) in the sun dreaming and turning a chocolate brown. "I must be," she says happily, "part Mexican!"


What she's be like as a wife: If all he wanted was Jennifer, she's be tops. But if he wanted a housekeeper, a cook, an ambitious hostess and a brisk companion - he's better start courting somebody else! For Jennifer is just Jennifer - lovely, talented, easy-going and full of fun. House dresses don't become her and vacuum cleaners never come to her hand!

Favorite inanimate object: A sun-deck - where she lies toasting by the hour.

What she wants to be doing when fifty: Acting, acting, acting - in any kind of role. She'd also like to see often her sons and their sons. 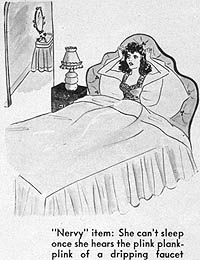 What most gets on her nerves: A dripping faucet. She can hear that "plink-plink" from any place in the house once she's in bed; she writhes in agony until she finally shoots out of bed to stop the racket. Bravest moment: Not one the day long - she's afraid of everything, including the dark! She was determined to be brave over the birth of her two sons, but they each arrived in the world in twenty minutes flat, thus breaking all existing records in New York State!

Greatest thrill: She shared it with 2,000 people when, at "The Song of Bernadette" at the Carthay Circle Theater in Los Angeles she, and they, saw Jennifer for the first time on the screen.

Most careless habit: Like a pack-rat, she leaves something wherever she goes - a purse, a hat, a handkerchief, or gloves.

Proudest achievement: Her sons, whom she openly adores.

Pet superstition: They are two: Always crossing her fingers when anyone predicts anything bright for the future; and, with childlike faith, never speaking of anything she really longs for - for fear it won't happen!

Most humiliating moment: When, in a scene for "Since You Went Away," she couldn't pretend to swallow a wad of gum as she was supposed to. The Academy Award winner was completely stopped, before a hundred members of the cast and crew.

Habit she's trying to break herself of: Sleeping. At eight o'clock every night she longs to take the phone of the the hook and the coverlet off her bed and turn in for eleven hours straight! "But my goal is six hours' sleep and no more," she says sadly, and she's trying hard to make herself stay upright for eighteen hours a day!

Most frightening moment: When a cruel prankster phoned to tell her that some children were in the Emergency Hospital after a dreadful automobile accident - and for hours of horror she thought that her sons and their nurse had been injured. When they walked through the front door, she fainted from shock. This was someone's idea of a gag...but whose if not Frankenstein's?

Greatest virtues: Her quiet dignity about herself, her love for her children, her almost magical quality as an actress and her warm friendliness to anyone, great or small.

What she doesn't suspect about herself: That, because she played Bernadette breathtakingly after little acting experience and because she smilingly hides every deep detail of her private life, she is regarded as one of the most mysterious women who ever appeared in Hollywood! She'll do as Hollywood's Sphinx until the real one comes along.